There comes a time in every sportsman's life, when the spectre of retirement starts to loom large on the horizon. Over time it gets bigger and bigger, and the battle becomes harder and harder.

This Goliath however is a smarter cookie than his more famous ancestor. He will lead you to believe you can live to fight another day.

He hates to see you call it a day when you're still the boss. He loves to see you unceremoniously dragged off the stage you once dazzled with your skills.


Even David lost to this bully. What chance does an aging sportsman have?
Posted by Manoj Jacob at 11:10 AM No comments:

He'll have to go.

The first day of the 3rd test against Australia has just ended. The humiliation takes a break for 12 hours.

India is on the brink of its overseas test score turning 0-7. If all goes according to form, it will be 0-8 at Adelaide. So pitiful has the display been, that there is no option but for the sword to be drawn. Heads must roll.

So who goes? I'd start right at the top. There must be no mercy for the humiliation that I, the Indian cricket lover feels today.

Every member of the BCCI must go. Since shame is a scarce commodity, I suppose they will have to be nudged. Accept moral responsibility fellows, and clear out. Cricket in this country deserves better leadership than what you can provide. You've ensured that Indian cricketers make a ton of money more than their English or Australian counterparts, and for that I congratulate you. Unfortunately however, you've also ensured the Indian cricketer is now a fattened sloth. There is no hunger to perform on the field of play, and for that I deplore you.
By turning T-20 into a money spinning machine, you've dug a grave for India in test cricket. Quickfire knocks earn quick big bucks, while the reward for turning out in white over 5 days is small change in comparison. The depressing consequence of your shortsightedness, if you haven't seen it yet, is broadcast in high definition to millions of Indian homes.

You, the selectors must go too. Without exception. You have failed miserably. I don't care if you were icons in your playing days. Today you are a bunch who failed to pick a fighting XI from an overpopulated country. The game has changed since you last stepped up to the crease, and your reading of the game is better off in a history book, or a commentary box where I have the option of turning the volume down.

Players, you have my sympathy, but I can afford you no mercy. Your current form is pathetic, and no matter how permanent your class is, it won't win us any matches unless you are out of the side. International cricket is simply not the place for you to be trying to rediscover your form. Besides, there are far too many young men working their butts off for the opportunity you are currently making a mess of.

It all adds up to the fact that change is needed. Desperately. Administrators, selectors and players must not be allowed to indefinitely occupy spaces they are undeserving of. Players must be picked on current form, and not on past records. Selectors must be held accountable for their choices, and for the lame excuses they offer the media. The cheapest form of the game must not be the best rewarded. National players must be asked to play the Ranji Trophy when not on duty for the country, and good form in the Ranji Trophy must be rewarded even if it comes from a newbie. The national talent pool must be grown to at least 50 from the 11 it stands at today. Batsmen should be judged not by the runs they have scored, but by the games they have won for the team. So also with bowlers. Personal records must be asked to wait politely behind team accomplishments. Corporate India must be asked to take its hands of Cricket India.

Yes, there is a lot to do. And if this unending overseas humiliation doesn't trigger change, then I'd like to know what will. A 4 test series against South Africa?
Posted by Manoj Jacob at 4:06 AM No comments:

Taking the fight to the opposition!

Posted by Manoj Jacob at 7:38 AM No comments: 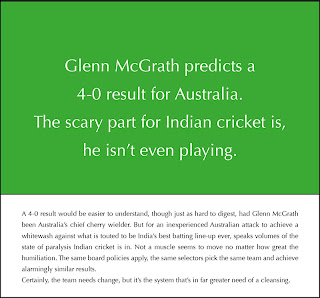 Posted by Manoj Jacob at 8:15 PM No comments:

Cricket, when I'd last heard, was still rumoured to be a team sport. It hadn't occurred to even me, a never-say-die analyst of the game, to lay siege to the veracity of this claim. Until recently.

In fact it struck me around the time that a James Pattinson bolt took Rahul Dravid's stumps for a long walk - the almost blasphemous thought that this might not be a team game after all.

The faithfuls who read this will be aghast, and baying for my blood. Perhaps even pass a sentence that I be cricket balled to death, in a manner similar to the more common practice that uses stones.

But wait! Let the man who has not heard me out be the last to cast a Kookaburra.

I have a defense which will take just a few more lines. Cast your mind back to the test match going on in Sydney. It's only day 3, and India looks headed for a defeat of the proportions of Yokozuna's rear. After which, our national cricket team will have achieved the unique distinction of losing 6 straight test matches overseas. Some consistency, eh?

Drastic changes await the team. Heads will roll. Difficult decisions will be made. New blood will be inducted. Perhaps even an Indian coach. Hope is indeed eternal. But as with every unbelievable proposition made available in our land, conditions will apply. So let's drop each player in the team one by one, debate the decision along with the conditions that apply, and see what we're left with.

Before we do, please note that a lot of what I suggest below, however plausible it may seem, is to be viewed as pure, unadulterated fiction. It's never going to happen.

Virender Sehwag goes first. He's done precious little in this series, and has looked capable of doing even less.
Can you drop Sehwag? Are you @#$%ing out of your mind? He's a potential match winner man. He's got over 8000 runs behind him, and is the the kind of guy who can take the game away from the opposition very quickly. (I might point out here that he's currently doing just the opposite but even faster.)

Okay, so we'll retain Viru. Let's drop Gautam Gambhir.
Look dude, let's be fair to the guy. He's just got a 50 in the second innings of the ongoing Sydney test, and heck, he's not out yet. He might score a century, maybe even a double. And you can't blame him for the team's performance. He's done his part. (In the nick of time I might add.)

Mate, if there's one man I can trust to bat for my life, it is Rahul. He's the most complete batsman in the team, and I'm afraid you won't find an adequate replacement in the next 25 years.
Good Lord, I think. This is catastrophic. Dravid is 39 in January. Does this mean he will play for India till he is 64?

Wait, let it not be said that I twisted your arm to get my way. Have you not watched Sachin bat in Australia? He has so much time to play the ball (even more back in the pavilion, I am thinking), he looks like he'll be coming back for the next tour. Okay he hasn't yet got a big score, but he's the only one who looks like he's going to get it. See my point?
Of course I see your point. It's got my arm in a vice like grip, held painfully up in the vicinity of my shoulder blades.


Laxman has to go. He used to be very, very special. Now he looks very, very shitty. So let's give that boy Rahane or Rohit a chance. Laxman it is. Surely you cannot object to this one.

Look dude, see what happened the last time people like you started to write Laxman off. He scored 281. Don't let his demeanour at the crease mislead you. He just looks disinterested, but when he gets going he's poetry in motion. He even has 3 centuries at Sydney over the years, and who knows, the fourth might come in the second innings.
Ominously, India has 2 losses and 1 draw to show for Laxman's 3 centuries at Sydney over the very same years. So while Laxman looks very, very safe, India's position is precarious. Yes, like the rest of my hopeful country, I have been waiting for Laxman to get going. Lax wait, not to the pavilion.

Okay, I'm drawing the line here. I don't have the heart to suggest Kohli. He's young and just in to the test side. To his credit, a few Aussies have seen his middle finger.

The final verdict? No one goes. Why? Every player has done something precious to prove his worth and save his place. A fifty here. A century in a lost cause. A few wickets there. A 5 for 314.
If not in this series, look back 5 years. No? 10 years then. Wait, make it 15.

So what if the team loses. Consistently performing individuals cannot be expected to pay the price even if the team is losing consistently. After all, form is temporary while class is permanent. Let's just find timid opposition to achieve redemption, fix averages and justify selection. The show must go on.

A show in which lovers of the great game are hypnotised with visions of patriotism and national pride, and lured to a TV screen to watch advertisements of bath soap, deodorant and tooth paste. To help channels rake in millions to be shared with the administrators, on whose payroll are the individuals who profess to be playing for the team.

It does look like a team game, doesn't it.
Posted by Manoj Jacob at 12:34 PM No comments: